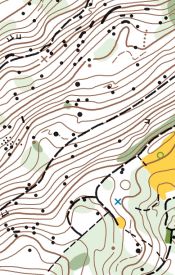 Image: Extract of previous map of Carona, the area for the middle qualification.

The biennial European Orienteering Championships begin on Sunday 6th May with the sprint qualification and final, and finish the following Sunday with the classic forest races. They are in the Italian speaking part of Switzerland, hosted by the Canton of Ticino.

There will be good coverage of the championships at LiveOrienteering. And there will be plenty of other sources of results and reports to also enjoy, or to rely on if you haven't the time (or money) for internet TV.

Now here's a question whose answer might surprise - in what orienteering discipline has Great Britain enjoyed most success at the previous two European Championships? All disciplines are included in these championships (the sprint relay was new in 2016):

Before the answer to the question, let's try and "position" these championships, as they sometimes say in business. How does a "European Championships & World Cup Round 1" compare to other competitions, especially the World Championships?

Sports fans in Britain unfamiliar with orienteering will think that "European Champs" are a full step below "World Champs". "World" surely outranks "European", because it is bigger. (In passing we note both are - by policy - of lower rank than "Olympics" - see for example the UK Sport website: "UK Sport is accountable to the Department for Culture, Media and Sport. UK Sport has a very clear remit at the ‘top end’ of Britain’s sporting pathway... Primarily this means working with our partner sporting organisations to deliver medals at the Olympic and Paralympic Games.")

Those who follow orienteering know this is not so much the case. Firstly all the strong orienteering nations are European - for an entertaining exposition on country strengths see Simon's article on medal chances written after the sprint qualifiers, the first day of last year's World Champs (WOC). And secondly, the stronger nations have more entries than they do at WOC - more in the individual races, and two teams in the forest relays. So if your target is say, an individual top 20 or a forest relay podium, it is harder as there is more competition at your standard. (You might also check the discussion of where Great Britain currently ranks).

Table of past medal winners.

So whilst these Championships are of course less prestigious than WOC, they are not a full step below. They are certainly well worth your interest.

IOF summary of the championships.

Great Britain announcement of a team of seventeen athletes was made on 5th April.
It includes an index to who is running on which day.

On The Red Line - news post about the team announcement.

On The Red Line - article linking to the Swiss, Swedish and Norwegian team announcements.

Nice story about the Championships two years ago from the British Orienteering News archive.

World of O - summary of the GB team two years ago.

The only competition with formal targets for the GB team is WOC.

For the Europeans whilst a medal would be very nice (and it is admirable to hope for one), if it is the only concern, then those supporting and following the team will find less to interest them. And they also are much more likely to be disappointed with even very good performances by the British team.

A reminder of the achievement categories that are recognised:
medal (top 3)
podium (top 6)
top 10
top 20

The hopes are a bit different as between individual and team events.

In the individual events, top 20s are the long-term aim for nearly all athletes. Top 10s are achievable by the strongest athletes, but they're difficult to get, and achieving will be the result of much hard work over years and usually a very good performance. Podiums are significantly harder - they are very difficult to get and are always great performances. Medals are truly outstanding when they occasionally happen.

In the relays, the top 10 often happens, and the hope is that during a major competition one team will get a podium.

In the last two European Champs the Women's Long is the discipline in which Great Britain has enjoyed most success - the one medal, and one of the two podiums.