Jo won the British Long Distance Championship race at Balmoral in May 2018. 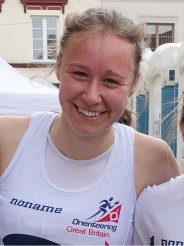 I started orienteering whilst at school and joined INVOC after winning a year's free family membership at the Highland schools orienteering championships. As a junior, I was W14 British Champion, eight times Scottish Champion for my age-class and twice won the JHI. In 2010 I competed at EYOC in Spain but closely missed selection to JWOC and/or WUOC every year for the entire duration of my university studies.

In my final year at Edinburgh University, I decided to complete my 6-month chemical engineering master project in industry and contacted Halden SK in Norway who helped me find a project at the Norske Skog Saugbrugs paper mill. The top-class terrain and training environment of Halden SK benefited me hugely and I was selected for my first World Cup race some months later. I moved back to Halden after graduating in summer 2015 and I now work as a process engineer at the paper mill. I made my World Champs debut in Sweden 2016 and one year later achieved 18th place in the middle distance at the World Championships in Estonia.