The athletes will each have personal plans that encompass both international and club based competitions, and of course their training, and will take account of the selection policy published by British Orienteering.

30th March - 2nd April - the JK Festival - this year in the West Midlands.

After the JK the GB team for the European Championships (see below) will be confirmed.

19th - 20th May - British (Long) Championships, British Relay Champs. This year's British Championships are in the Highlands, on the Balmoral Estate, Royal Deeside. Balmoral is the Scottish home to the Royal Family.

After the British Long the GB team for the World Championships (see below) will be confirmed. There are top notch races on successive weekends in the Highlands..

The Championships are also World Cup Round 1.

GBR may enter 6 men, 6 women in each of sprint and middle (they have qualification rounds), 3 in each long race, 2 teams in each forest relay, and a sprint relay team.

About half the GB team for the European Championships have been advised of early selection - the selections were published 21st December on the British Orienteering website.):

Picture: the colours of the Stockholm club OK Ravinen are regularly seen on British runners; here worn by Tim Morgan.

The shared endeavour of inter-club competition, especially relays, is a popular, motivating and significant part of the sport throughout Scandinavia. The club ethos is strong, and the sport is organised through the clubs, both for arranging events, and for taking part. And most of the strongest Scandinavian club teams have international runners, some of whom live and train locally, some of whom don't. It is generally thought that any British runner wanting to become really proficient at forest orienteering should spend time with a Scandinavian club. Amongst the best-known clubs with British ties currently are the Swedish OK Ravinen (who Nick Barrable runs for and where he regularly organizes a British junior training programme), and the Norwegian clubs Lillomarka (who Matt Speake runs for) and Halden SK (many athletes over the years, Jo Shepherd and Hollie Orr at the moment.)

Photo from the Södertälje-Nykvarn Orientering club website, used with thanks.

10-mila offered everything: beautiful weather (some rain showers during the night), good terrain and map, cobblestone tracks and forks, well-functioning reporting, an event centre close to everything, a nicely built SNO camp with its own ground and last but not least a big measure of excitement.

The women's race on the Saturday afternoon, and the open race starting a bit before dusk on Saturday, are the enormous club relays in Sweden. They attract teams from all over Scandinavia, and a few from further afield. They're what many runners look forward to most through the Scandinavian winter, and they act as a real rallying point for the clubs and the sport. TV coverage is good (via the internet in the UK.) And except for the sprint specialists, most, if not all, of the GB squad will run for their Scandinavian clubs, many in teams at the sharp end of the racing.

These are the Finnish relays and are similar to and have equal standing with Tio Mila. Venla, the women's relay, runs in the day on the Saturday. Jukola runs overnight - but Finnish midsummer nights are not so long.

The Other Big International Orienteering Meetings

8th-15th July - Junior World Championships (JWOC) - Hungary. This is for orienteers under age 21 (i.e. M/W20) and so for younger athletes than those On the Red Line follows. GB always participates, often with top-10 results. The team is six men and six women. Not all current squad members ran in JWOC as juniors, but many did; their records are in the database link from their athlete profile.

17th - 21st July - World Universities (WUOC) - Finland, for athletes born 1993 or later and in education or graduated in 2017. As I write the new GB position on WUOC is unclear. 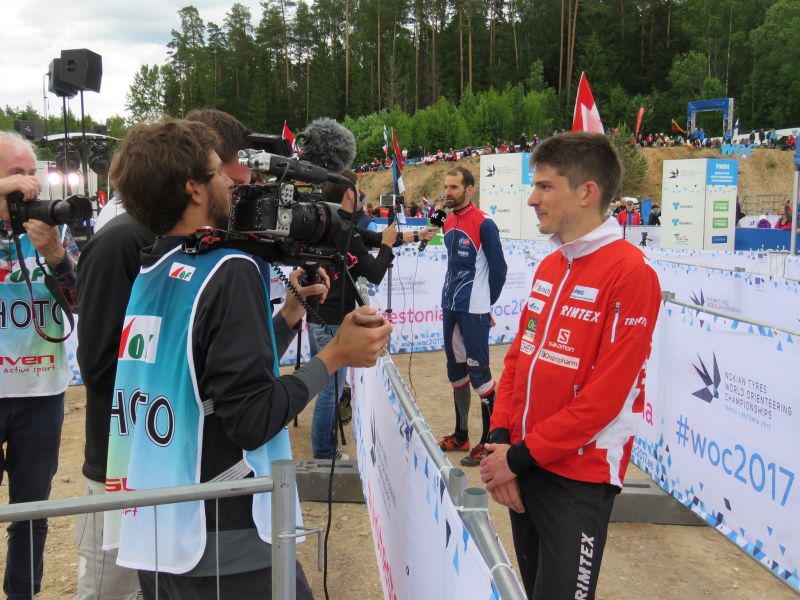 Picture: Thierry Gueorgiou and Fabian Hertner talk to the press at WOC2017, photo by Maprunner.

Lots to see, and everyone has the chance to spectate and take part in the separate race programme of Latvia O-week. Details.

These are the only competition for which the GB Team has a formal target set (One medal, One Podium, Two top 10s, Four top 20s.) Looking ahead to these will be a regular theme of this website until August, and we plan fervid coverage during the racing.

For GB these tend to be as much about gaining experience and ranking points, as the World Cup competition itself. But there are podium places at stake, and World Cup ones are of high standing.

Invariably the top of the World Cup competition comes down to a contest between a few athletes who have done well through the year, and they are usually Swiss or Swedish. Incidentally, this is the first year for a long time that the final round is not in Switzerland. And in 2019 it will be in China. Note the new "knockout sprint" format is being used for the first time in the final round this year.